Vienna is home to almost 2 million people, making it the most populated city in Austria. Dressed with Baroque streetscapes and palaces from the distant imperial past, this metropolis reels in tourists from all over the world. It’s a cave of artistic and musical treasures that set the stage for a fun vacation for the entire family. Here is some vital information to arm yourself with before kicking off your journey to the City of Dreams.

From whatever angle you look at it, you will almost certainly conclude that Vienna is a unique city that stands out even among the best cities in Europe. Its culture, architecture, art, and music are just some of the screaming testaments to this fact. 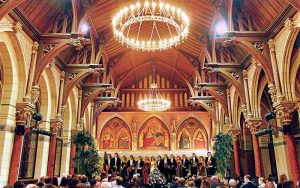 The imperial splendour of Vienna can be attributed to the mighty Habsburg Monarchy. Their architectural grandeur can been seen in buildings such as the Imperial Chapel, The Spanish Riding School, and a string of museums. Others include the City Hall and the Schloss Belvedere which were built in the baroque style.

The imperial art collection is housed safely in the Kunsthistorisches Museum of Vienna, a stunning building topped with an octagonal dome. Different works of Austrian art from the past masters adorn the galleries, along with the most expensive coin collection in the whole world. The Naturhistorisches Museum will please those looking for more natural exhibits. It houses such discoveries as meteorites and fossils from ancient times.

It wouldn’t be a stretch to say Vienna has furnished the finest musical geniuses in the whole world. This is the homes of master composers such as Wolfgang Amadeus Mozart, Ludwig van Beethoven, Johann Strauss and Franz Schubert. This musical prowess has spilt right into the modern times. Watch soul-stirring entertainment at such venues as the Musikverein, the Staatsoper, as well as the Konzerthaus. 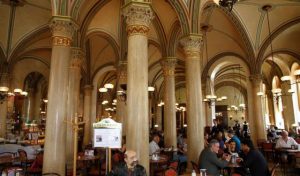 Vienna is not just the home of fine music. It also extends this penchant for fine things to its kitchens. From fine wines to mouth-watering cakes and masterfully prepared beef, you will enjoy more than a mouthful. The city is dotted with restaurants oozing with elegance, lavish coffee houses, and taverns on the outskirts.

Things to do and see in Vienna

Get lost in Vienna’s vineyards

A sizeable patch of Vienna is covered in vineyards. These go on for seven square kilometres, making the city one of the largest wine growing spots in the world. One way to finish off a summer day is by joining the locals at one of the wine taverns in the evening.

Explore the city’s beaches and pools

While Vienna has no coastline, it does try it’s best to give you a beach experience. You can get to the Dunabe River where you will find great spots for a swim. If you like, you can visit the Alte Donau which has a few fee-paying beach clubs.

Catch an aerial glimpse of the city 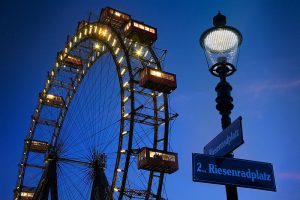 One of the most popular thrills Vienna holds is the huge Ferris wheel, the Riesenrad. It stands at a height of 64.7 metres and is a great way to get an aerial view of the city. The Wiener Riesenrad is located right at the entrance Prater Amusement Park.

The Tiergarten has been standing since 1752. Is has seen Austria’s Ups and downs and to this day continues to entertain locals and visitors, both the young and old. There are different animals to see, but the ones that hold centre stage are the giant pandas.

See the city on two wheels 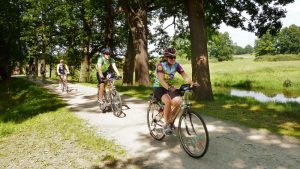 If you are a cycling fan, you will love the winding cycling paths that cover Vienna. These add up to over 1000 kilometres which is too much even for the most enthusiastic cycler. You are promised stunning architectural and natural views along the ride.

The best way to move around the city is by public transport. Hands down, it has the best transport system in all of Europe. There are trains, buses, trams and cabs to choose from. These are on the cheaper side and are used by tourists and locals alike.

Time your holiday in April to May and September to October if you want to find sparse crowds. Spring and fall is a time of low hotel prices. The warmer months, which stretch from June to August, draw too many visitors and these cause the prices to skyrocket. The warm atmosphere is worth it, though.